How the 8th amendment saved hundreds of babies with Down Syndrome

Thanks to prenatal screening, far fewer babies with Down Syndrome are being born than was once the case. A recent study shows that across Europe as a whole, the reduction is in the order of half, but in Ireland prior to the introduction of abortion two years ago, it was ‘only’ 8pc, whereas in Spain it is above 80pc. This may become even worse with non-invasive prenatal testing becoming more widely available.

The study was published in the European Journal of Human Genetics.

The researchers, led by Dr Brian G Skotko from the Department of Pediatrics of Harvard Medical School, studied the period 2011-15 and discovered that 10.1 out of 10,000 live births in Europe involved children with Down Syndrome. They estimated that, in the same period, on average 54pc of babies found to have DS were aborted. Without these abortions, the prevalence would have been 21.7 per 10,000 live births. 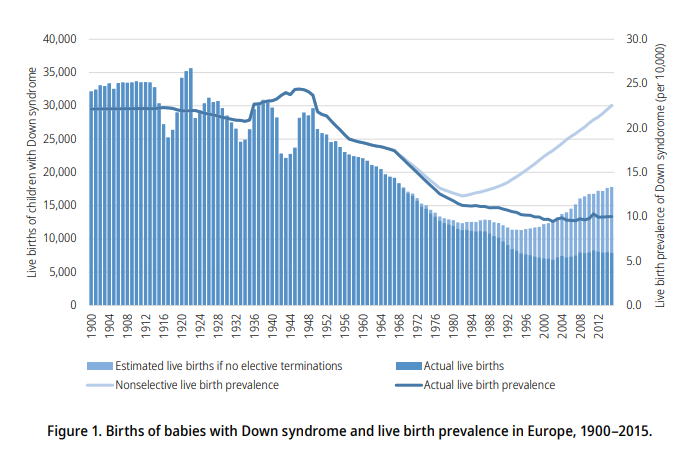 As mentioned, this varies greatly country by country. It is very low here so far, but very high in countries like Spain, Portugal, Italy and Denmark. The fact that it is so high in the first three, shows how a eugenic mentality has overridden the Catholic culture of those societies. 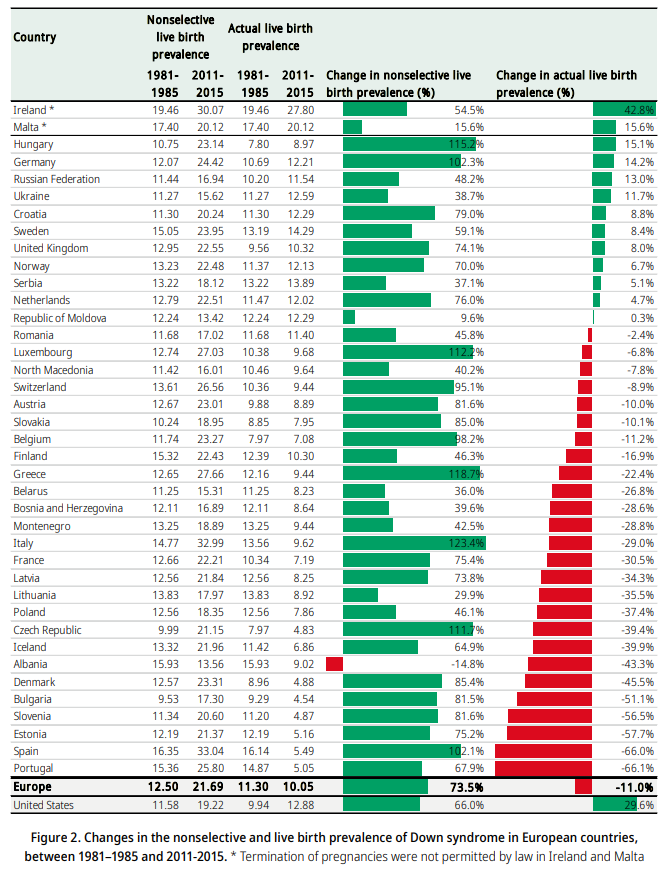 The study estimated that without selective abortions, which are a form of eugenics, the number of people of all ages with DS would be 27pc higher in Europe that it is. This would be much worse than it is were it not for the fact that many people with Down Syndrome were born before prenatal testing become widespread.

It would also be worse were it not for the fact that people with Down Syndrome, once born, live much longer than they used to because of medical improvements.

It is a paradox that when people with DS can live longer more fulfilling lives, they are also killed before birth as never before.

Things are likely to become even worse as noninvasive pre-natal screening is made available to more and more couples. These tests can detect conditions like Down Syndrome at earlier and earlier stages of pregnancy.

Under Irish law you cannot have an abortion specifically because a baby has a serious (but non-lethal) chromosomal or genetic abnormality. If you want an abortion for that reason, you must still travel to Britain, and in 2019 27 Irish women did so. Nonetheless, you can have an abortion here for any reason up to 12 weeks. If DS can be detected before 12 weeks, it will almost certainly lead to a big reduction in the number of children being born here with DS.

The study itself acknowledges that “reduction [abortion] rates are very low in Malta and Ireland where terminations are highly restricted”. (It refers to the years 2011-2015, before we changed our abortion law). The 8th amendment has without doubt saved thousands of lives, including the lives of hundreds of babies with chromosomal or genetic abnormalities.

Before the 2018 abortion referendum, the pro-life side warned that with the repeal of the 8th amendment more Irish babies with Down Syndrome would be aborted.

The experience of other countries shows this is absolutely true.