An important voice in favour of fathers speaks out 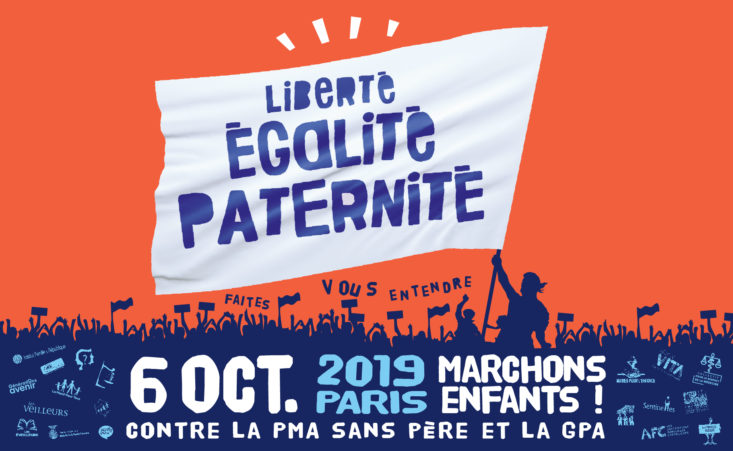 The French parliament is debating a new law which will extend assisted reproduction to single women and lesbian couples as well. What is interesting is the fact that no less a body than the National Academy of Medicine has objected to the proposed reform on the ground that will be permit the deliberate creation of children who will be raised without a father.
Currently French law only permit couples experiencing infertility to access IVF and other forms of assisted human reproduction – PMA (procréation médicalement assistée) in French. Under the proposed new law, where a single woman or lesbian couples avail of PMA, the name of the father will not appear on the birth certificate even if the donor is known, and, in the case of female couples, both women will be recorded as “mothers”. This is clearly a falsification and vital information will be hidden from the child.
Single men and male couples are not included in the new legislation but many fear that this restriction is only temporary. The slippery slope is inexorable, and critics also believe that in time the new proposal will inevitably open up to surrogacy – currently banned in France – as men obviously need a woman to carry a baby for them. The current Government is already well disposed to the recognition of children born from surrogacy in a foreign country, which will make the domestic ban ineffective.
This proposal represents a substantial change as it means that some women will access PMA without suffering from infertility. (Same-sex couples and single women are not infertile per se).
The National Academy of Medicine (Académie Nationale de Médecine) has stated that “The deliberate conception of a child deprived of a father constitutes a major anthropological break, which is not without risks for the psychological development and the flourishing of the child.”
The Academy “believes that, increasingly mistreated by changes in society, the figure of the father is still foundational for the child’s personality as recalled by child psychiatrists, pediatricians and psychologists.” It recognises that the Academy’s role is not to “give an opinion” on a “social measure”, but it “considers it its duty to raise a number of reservations related to possible medical consequences“.
The desire for a child will become a right to a child by almost any means. And this new “right” will prevail over the legitimate right of a child to have a mother and a father, when possible.
The new proposal has been heavily criticised by many sectors of the French society, including members of Macron’s party. A national protest day will be held on October 6.
A survey found that 82% of respondents believe that a child has a right to a mother and a father. 77% believe that a father and a mother have different and complementary role, and 66% oppose that replacement of “mother” and “father” with “parent 1” and “parent 2” in school forms, which has already happened.
Minister Simon Harris has proposed legislation regulating human assisted reproduction that is much more extreme and liberal than even the proposed French reform and, still, no debate is taking place in Ireland. There is no real opposition to what the Government presents.  Under Irish law, the need for a mother, never mind a father, is not considered.
In the Bill proposed by Harris the desire of the commissioning adults who want a child is paramount. Having a mother and a father does not matter anymore.
Posted by Angelo at 11:16 PM