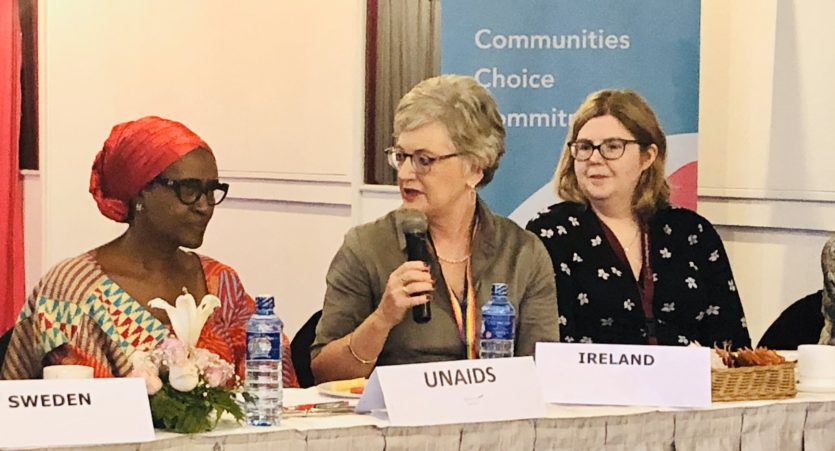 Minister for Children Katherine Zappone, and a number of other Irish politicians, are currently attending a summit in Nairobi, Kenia, to mark the 25th anniversary of the 1994 Cairo Conference on Population and Development.  The occasion was the first time ever that economic and social development had been linked to population, or as critics would have it, population control. The summit saw a huge battle waged by Holy See, allied to a number of UN member-states, to stop language that implicitly supported abortion being inserted into the population and development programme.
Attempts to ally the UN to campaigns for abortion ‘rights’ have only picked up pace since then, and Ireland appears to be joining in. At the end of September, Minister Zappone announced funding of €350,000 to support the Nairobi Summit, “making sure women can choose freely whether, when & how often to become pregnant”. Does this step include promoting or providing abortion services or access to it? It would not be surprising if this is the case.
In September, the UN held a meeting on Universal Health Coverage that brought together 172 heads of state and government, and ministers.
A number of nations, including Ireland, signed a declaration claiming that Sexual and Reproductive Health and Rights (SRHR) are the cornerstone of Universal Health Coverage (UHC).
Even if abortion is not explicitly mentioned in the declaration, SRHR in practice implies the promotion of abortions, or at least this is how some governments want it to be interpreted.
This declaration was a response to an attempt by the US Government, backed by 20 countries representing more than 1.8 billion people, to excise the language of sexual and reproductive rights because it can mean abortion, and can be used to declare a human right to abortion. The same language is used to justify intrusive sex education that contravenes parental rights.
The US Secretary of Health, speaking on behalf of those objecting countries, said: “terms and expressions, such as sexual and reproductive health and rights in U.N. documents … do not adequately take into account the key role of the family in health and education, nor the sovereign right of nations to implement health policies according to their national context. There is no international right to an abortion and these terms should not be used to promote pro-abortion policies and measures. Further, we only support sex education that appreciates the protective role of the family in this education and does not condone harmful sexual risks for young people.”
Cardinal Pietro Parolin, representing the Holy See, reiterated similar reservations over such ambiguous language. Since the 1995 World Conference on Women in Beijing and the 1994 Cairo Conference on Population and Development, the Catholic Church, together with many prolife advocacy groups worldwide, has warned that SRHR language would inevitably enforce abortion on developing countries.
“The Holy See considers it most unfortunate that the adopted declaration includes the deeply concerning and divisive references to ‘sexual and reproductive health-care services’ and ‘sexual and reproductive health and reproductive rights’ as components of universal health coverage. In line with its reservations expressed at the international conferences held in Beijing and Cairo, the Holy See reiterates that it considers the phrase “reproductive health” and related terms as applying to a holistic concept of health, which embraces the person in the entirety of his or her personality, mind and body. In particular, the Holy See rejects the interpretation that considers abortion or access to abortion, sex-selective abortion, abortion of fetuses diagnosed with health challenges, maternal surrogacy, and sterilisation as dimensions of these terms, or of universal health coverage”, Cardinal Parolin said.
In 1994, Pope John Paul II put his personal prestige and the prestige of his office on the line; he also used every diplomatic resource available to him to assemble and lead a coalition of nations to stop the United Nations push to declare abortion a universal human right.
At the same UN meeting in September, Minister Simon Harris claimed: “Ireland believes that if universal health coverage is to be genuinely universal it should and indeed it must embrace all health services including those related to sexual and reproductive health as set out in the sustainable development goals.”
He continued: “We have taken vital steps in Ireland to ensure that such services are available, are of good quality, are accessible to all women & girls throughout their lives, free of stigma, discrimination, coercion and violence. Reproductive healthcare is a basic human right and should not ever be seen as a matter of political discretion. The Irish Government’s new international development policy, “A Better World”, prioritises gender and equality and provides for a number of new initiatives in this area.”
The Department of Foreign Affairs in the past has denied that its international development programme is funding any activities related to the provision of abortion services. But their policy might change now, given the recent introduction of abortion in Ireland after the referendum last year.
As Minister Katherine Zappone announced funding to support the Nairobi Summit and its agenda, it now time to clarify if this step includes promoting or providing abortion services. Should we expect any further announcements on this soon?
Posted by Angelo at 1:06 PM