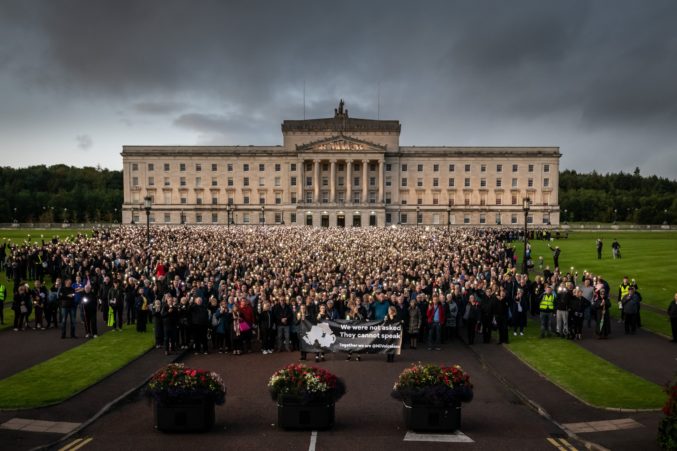 The new abortion law that came into force in Northern Ireland on Tuesday is so extreme than it is even more permissive than the current legislation valid for the rest of the United Kingdom, or in the Republic. The horrible irony is that while the North attempts to save people from Covid-19, this law will lead to the deliberate killing of the very youngest human beings.
The new legislation allows abortion on demand up to 24 weeks of gestation and up to birth if the baby is disabled. It also decriminalises the practice, something the rest of the UK or Ireland has not done.
The regulation distinguishes between 12 weeks, when abortion is available “without conditionality”, and 24 weeks, when it is permitted “where the continuance of the pregnancy would involve risk of injury to the physical or mental health of the pregnant woman or girl, greater than the risk of terminating the pregnancy”.
But this is an insignificant distinction because, in practice, abortion on the mental health ground is effectively abortion on demand.
The Abortion Act 1967, which is valid in Britain, has a similar ground and we know that no woman has been denied access to abortion on this basis, which actually counts for 98% of all abortions, 200,000 in all.
The newly published regulations actually specify that, “No diagnosis of a prescribed mental health condition is required in order to access the risk to mental health ground.” (Page 9)
How can a health condition be a ground for abortion and, at the same time, no diagnosis of it is required? If no medical assessment is necessary, won’t any request be granted by default? If so, the health ground is simply an excuse to extend abortion on demand from 12 to 24 weeks.
What makes the Northern Ireland legislation even more permissive is the fact that not only doctors but also nurses and midwives can carry out the procedure, while in the Republic and in the rest of the UK it can only be performed by a registered medical practitioner.
Another substantial difference is that in the rest of the UK and in the Republic, two doctors have to certify that the pregnancy has not exceeded 12 weeks of gestation while in Northern Ireland only one healthcare professional is required, and they don’t have to be doctors.
When the Abortion Act was introduced in Britain, in 1967, 24 weeks of gestation was considered the point of viability but with the progress of medicine we know that nowadays babies can be born and survive before that. A lower gestational limit could have been introduced but the British Government preferred to ignore scientific progress.
Another horrific provision of this new legislation regards children with disabilities. In the Republic, an abortion can be performed when it is believed that the baby won’t survive more than 28 days.
In Northern Ireland, when there is a disability the baby can be aborted even if the condition is not terminal. Babies who are physically or mentally impaired but nonetheless could survive, can be killed at any moment before birth.
In Northern Ireland there is a still strong prolife culture and until now, for instance, 90% of children diagnosed with Down Syndrome were born, while in England about the same percentage are aborted.
We know that a change in the law has an impact on culture. The liberalisation of abortion will make it more acceptable and also more common. Making disability an explicit ground for abortion will also inevitably change the attitude towards those who are disabled, reinforcing the derogative prejudice that their lives are less worth living.
There are many other provisions in the new law that deserve a longer commentary. For instance, it allows sex-selection, it doesn’t address coercive abortions, it doesn’t require parental consent for minors, etc. A detailed analysis can be found here but I want to address one last issue as it is relevant to a debate ongoing here in the Republic.
During the consultations on the proposal for the new legislative framework, the British Government has considered the introduction of so-called ‘exclusion zones’, which would preclude vigils outside venues where abortions are performed. The Government has decided not to include any powers to establish exclusion zones in Northern Ireland and to keep this matter under review once what they call “abortion services” have been commissioned and operational for some time.
“This decision has been made on the basis that services should be given time to embed so that service providers can assess any response required based on evidence and the Northern Ireland experience. The Government does not want to preempt situations that may arise, or ask that the relevant Northern Ireland  departments exercise new powers.”, the UK Government response says.
This is probably the only positive element in an otherwise horrendous law.
Posted by Angelo at 11:41 PM