Posted by Angelo at 11:21 AM Nessun commento:

Today's post highlights the recent work of Associated Press photojournalist Rodrigo Abd's in Peru. His subjects include members of the Ashaninka tribe; the Lord of Huanca Sanctuary; the "Ojo que Llora" memorial; blinding mists called "la garua"; and a memorial service for the Bishop Emeritus of Huancavelica. Abd was part of the 2013 Pulitzer Prize winning entry for breaking news by the AP for its coverage of the Syrian civil war. -- Lloyd Young ( 58 photos )

Posted by Angelo at 8:44 AM Nessun commento:

It is no vice that we can hold things to be true that, nonetheless, we are unable to visualize. Mathematicians do it every day when they work with imaginary numbers (which, contrary to their name, cannot be imagined). Particle physicists likewise write equations that express the truth about matter, a truth that is deeply paradoxical and thus unimaginable. And theologians, such as yours truly, speak of God as creating us while realizing that there can be no picture of creation : You can show a movie of some lumber being elegantly shaped into a chair, but you cannot show a movie of something being given existence. To create is not to reshape already-existing stuff but rather to let stuff be. There is no imagining Let there be light."

It used to be this way with regard to the mystery of the life of a child before birth. There were signs that something was going on inside the mother: Her body changed in many ways, and in due course her belly visibly swelled and kicking could be felt. People knew, as an intellectual matter, that there was a child inside her womb. But it was nigh impossible to visualize that child. It was no vice, indeed it was a virtue, to affirm the humanity of that which resided in the womb. Nonetheless, the childs human reality remained, in a sense, hypothetical because not seen.

I think back half a century now to my mothers swollen belly. I was about six years old, and I was allowed to feel it, and feel through it some particular bumps. The babys kicking you," I was told. I also remember the day when my mother was in dreadful pain and taken away. There was blood on her mattress. And I remember sitting in the funeral homes car at the cemetery, and lovely people smiling at me as they walked by my window. Over the years our family would visit the grave on occasion, usually to pull weeds and clip the grass. The stone says Marsha Jeane Austin," and it has a single date on it.

That I had had a sister, and that she was stillborn, is a truth I grew up with. In my young adulthood I sometimes imagined what it would be like to have grown up with her. When I came to believe that there is communion of the dead and the living, I sometimes asked her to pray for me. But, for the most part, her human reality was more hypothetical than actual. I had, and have, never seen her.

All this is changing.

Every young expectant couple I know today, without exception, when they have a prenatal visit, hope they will get to see the baby. Every babys photo book today has a sonogram for its first picture. The first pictures, and there are often many of them, are prenatal.

What is happening, largely unnoticed and far below the radar of the political debates, is that our cultures visual imagination of the human is expansively changing. We used to picture the human life cycle as going from birth to death. But adults who are now becoming parents, along with their friends and an increasingly wider circle, no longer think it strange to consider and picture as a human being, as one of us, one whose weight is measured in ounces rather than pounds and whose size is given in terms of a portion of ones own hand.

It is hard to overstress this generational change. I know a young priest who lost a child somewhere around the middle of his wifes pregnancy. This was their second child, and they named her. They would routinely speak of their two children, by name, even though only the one child was alive and growing in their family. This priest was admonished by an older colleague not to talk that way. You may think that way, he was told, but it is really strange to talk that way. People think youre weird.

The change is this: Thanks to technologys advance, it is increasingly not weird to visualize and speak of humans by name who never weighed more than a pound. Or half a pound. Or less.

I did not speak or even much think of my stillborn sister, even though she was pretty much full term. But today we can see with our eyes and thus have the boldness to speak with our lips what we previously knew but couldnt visualize: that some of our brothers and sisters would easily have fit in the palm of even a very small hand.

Victor Lee Austin is author of Up with Authority and Christian Ethics: A Guide for the Perplexed. He is theologian-in-residence at St. Thomas Church in New York City. 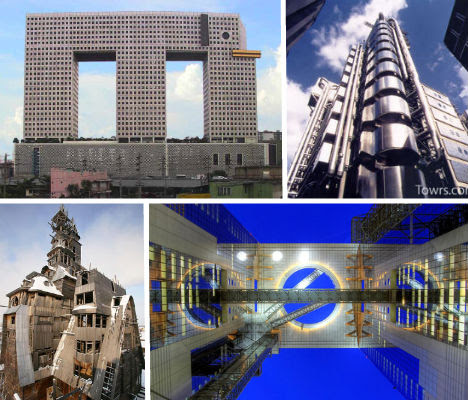 There’s the inside-out skyscraper, the horizontal skyscraper and the wooden skyscraper. There’s a bizarre three-towered structure made to vaguely resemble an elephant, tusks and all. And then there’s the giant pickle. These 14 buildings are among the most bizarre in the world, and they stand out all the more for their sheer height. 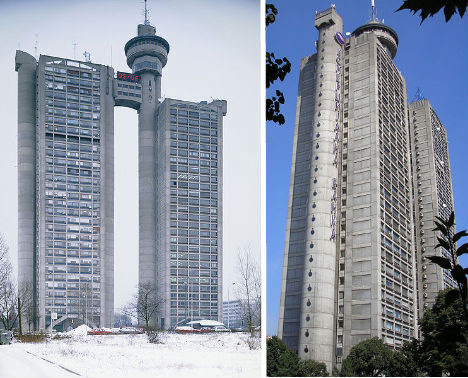 It’s the third-largest building in Europe, designed to look like a huge gate greeting visitors as they arrive in Belgrade from the west. But Genex Tower is hardly a welcoming sight to many, called “phenomenally ugly” in more than one place on the internet and dismissed as one of the worst examples of Brutalist Architecture. The twin concrete towers, joined together by a revolving restaurant, are certainly among the stranger skyscrapers in the world. 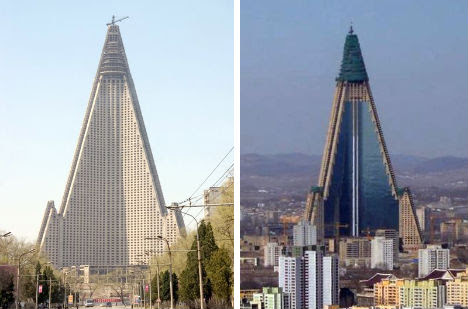 Is this the world’s ugliest skyscraper? Veiled in secrecy in North Korea, the Ryugyong Hotel sat in construction limbo for so long that people thought it had been abandoned. Its unusual triangular shape paired with a raw concrete finish made it a bit of a laughingstock among architecture enthusiasts, though recent changes since construction resumed have made it look a bit less severe. 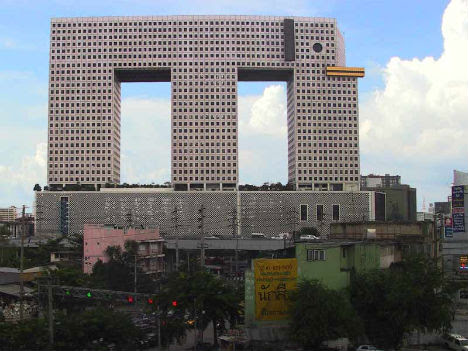 Perhaps the architects who designed this bizarre building in Bangkok stepped back from their plans and thought, hmmm, this set of three concrete blocks needs something. We know – round windows for eyes and shapes that vaguely suggest ears and tusks! Or something. 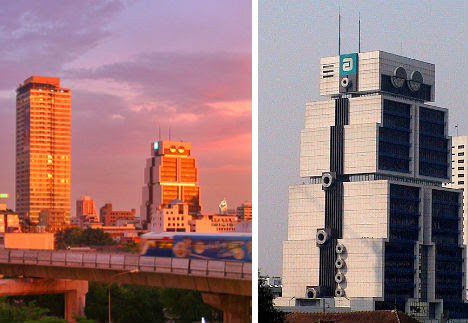 When you spot this skyscraper in the Bangkok cityscape, there’s no question of what it’s supposed to be. The Robot Building was designed for the Bank of Asia to reflect the computerization of banking and is one of the last examples of modern architecture in the city. Architect Sumet Jumsai, who reportedly found inspiration in his son’s robot toy, made the building so blocky as a protest against the neoclassical and high-tech postmodern architecture that was sweeping the world in the early to mid 1980s. 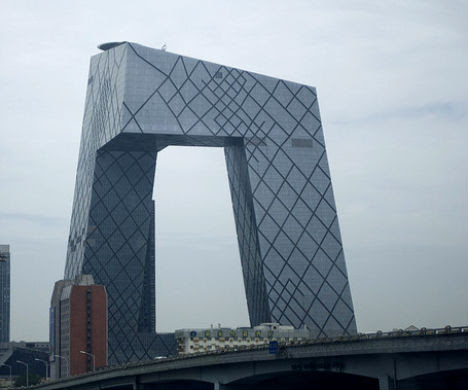 This 44-story skyscraper, which serves as the headquarters for China Central Television in Beijing, earned the nickname “big boxer shorts” soon after completion in 2009 for its rather unusual shape. It’s described as a loop of six horizontal and vertical sections and figuring out how to translate the design into a structural reality was no easy task, especially in a seismic zone. 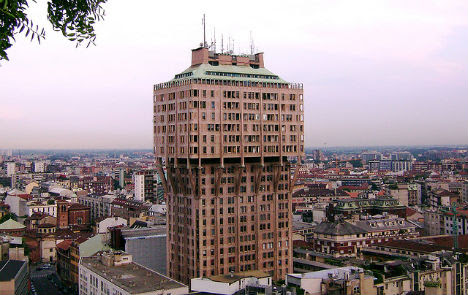 Why is that tower shaped like a mushroom? Standing tall in the city center of Milan, the Torre Velasca definitely contrasts with surrounding architecture, though it was designed to be a modern interpretation of typical Italian medieval castles when it was created in 1954. It’s a divisive presence in the city, with some residents regarding it with affection and others bemoaning its dominance of the skyline. 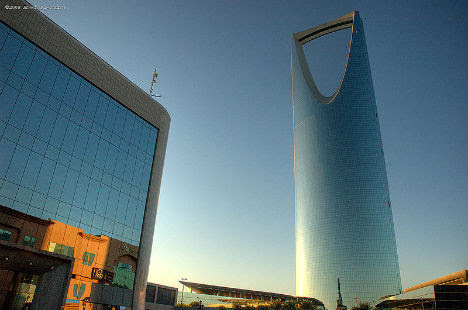 (image via: the full wiki)

With its unusual keyhole design, the Kingdom Centre in Riyadh would be a standout even if it weren’t Saudi Arabia’s tallest skyscraper and the world’s second tallest mosque. Also known as Burj Al-Mamlaka, the Kingdom Centre was selected as the world’s most well-designed skyscraper in the 2002 Emporis Skyscraper Awards. The architects created the keyhole in the top in order to conform to city laws that don’t allow occupied floors above a certain height. 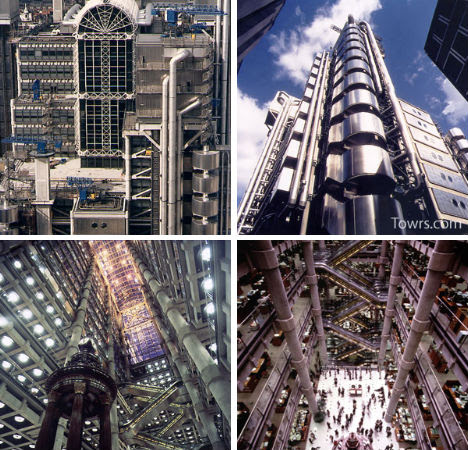 The Lloyds of London building is undeniably weird between its mish-mash of architectural styles and the bizarre jumble of structures clinging to its exterior. The building, which has all of its ‘guts’ including water pipes and elevators on the outside, was ostensibly designed this way so that the interior would remain uncluttered. Whether or not this approach worked (bottom two photos) is perhaps a matter of personal opinion. 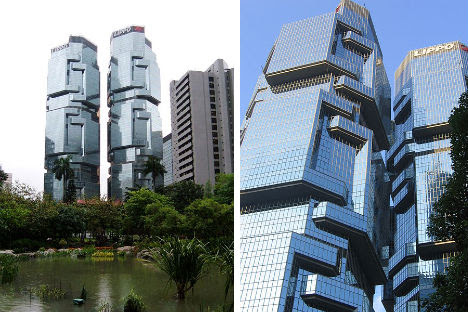 Distinctive? Definitely. Dubbed the ‘koala tree’ for its resemblance to koalas clinging to a trunk, the Lippo Centre in Hong Kong is unlike any other office building in the world. American architect Paul Rudolph hoped to make these towers less severe with C-shaped clusters of windows that stand out in relief against the exterior. 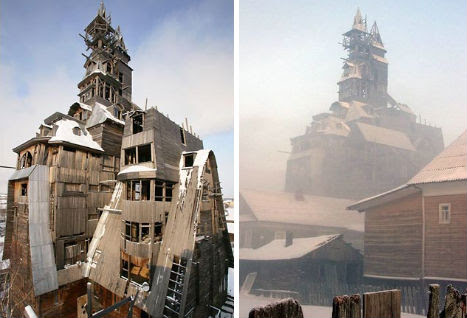 (images via: the telegraph, english russia)

Built by a single man out of an improbable material, Russia’s wooden skyscraper is believed to be the tallest wooden house in the world at 144 feet and 13 stories. Nikolai Sutyagin, a former gangster, spent 15 years continuously adding additional floors to his home because he was never satisfied with the way it looked. The structure is crumbling and neighbors worry about fire, but for now it’s certainly quite a sight. 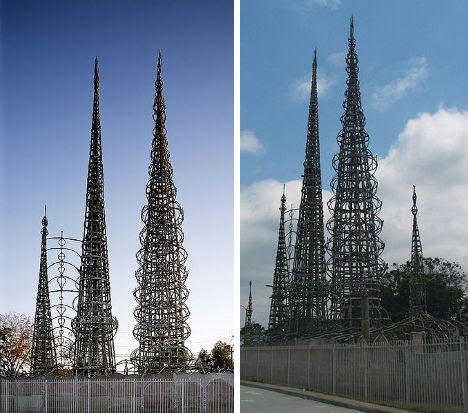 Reaching over 99 feet into the air, the Watts Towers – also known as the Simon Rodia Towers for the Italian immigrant who spent decades building them – aren’t exactly skyscrapers. They’re more like towering sculptures. But the steel pipe, rod and wire structures are undoubtedly landmarks in the Watts district of Los Angeles and are now listed on the National Register of Historic Places. 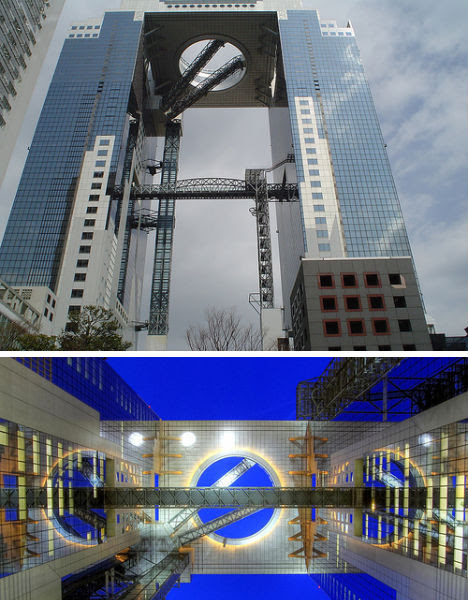 Strange and futuristic, the Umeda Sky Building in Osaka features bridges and a glass-enclosed elevator that criss-cross the empty space between two towers, which are connected at the top by a rooftop observatory. The building is so tall, it provides a 360-degree view of the city. 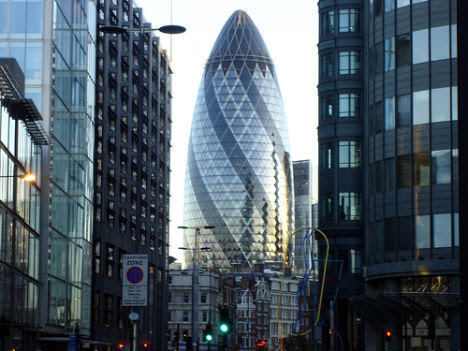 It’s been called Gherkin, Towering Innuendo and Crystal Phallus, but the unorthodox building that stands out like a sore thumb in London is officially known as 30 St Mary Axe. Designed by Norman Foster, the skyscraper was purchased for over a billion U.S. dollars, making it Britain’s most expensive office building. 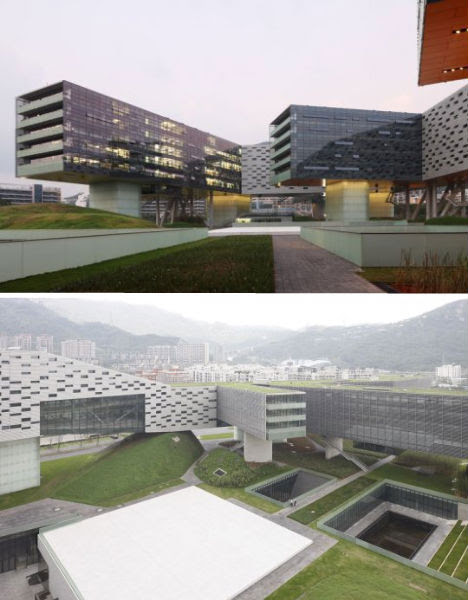 Who ever heard of a horizontal skyscraper? It may sound strange, but it actually exists, and it’s one of the most iconic designs in famed architect Steven Holl’s repertoire. Also known as the Vanke Center, the horizontal skyscraper looks like a series of towers turned on their sides and suspended above a tropical landscape in Shenzen, China.

Posted by Angelo at 9:45 AM Nessun commento: 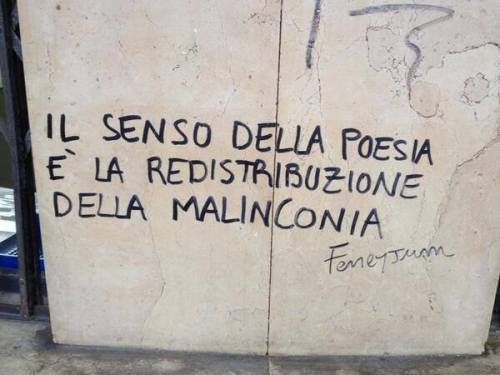 Posted by Angelo at 9:53 AM Nessun commento: 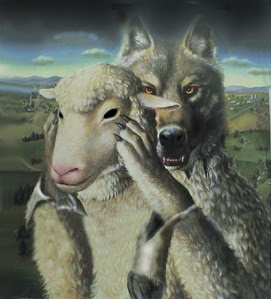 Posted by Angelo at 9:01 AM Nessun commento: 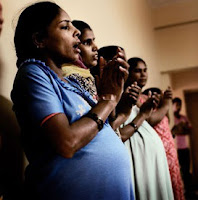 The Bus by Paul Kirchner

The Bus by Paul Kirchner: 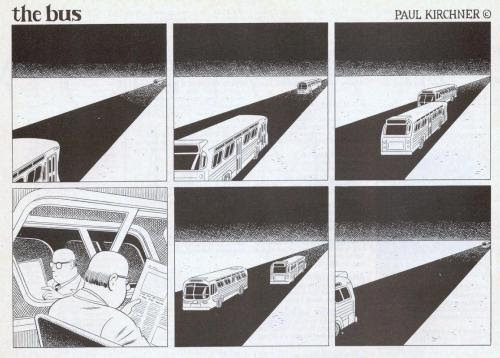 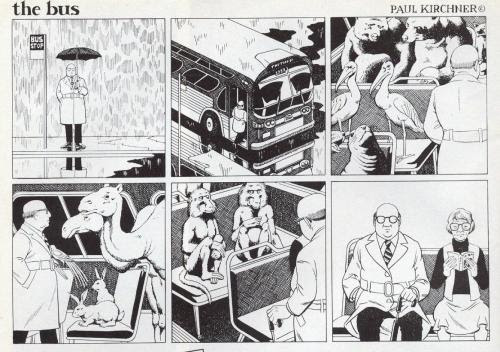 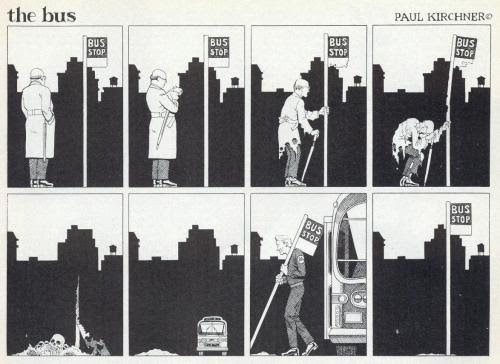 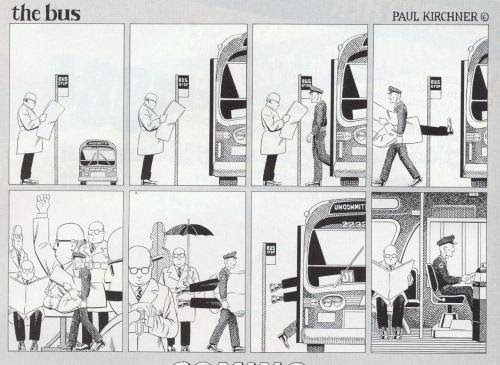 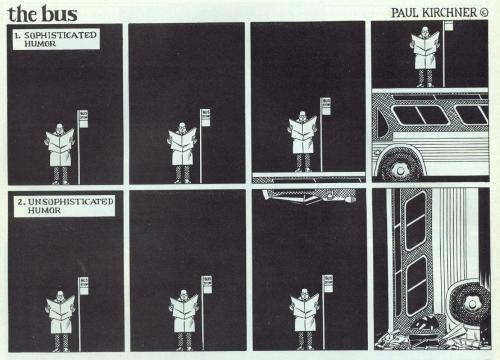 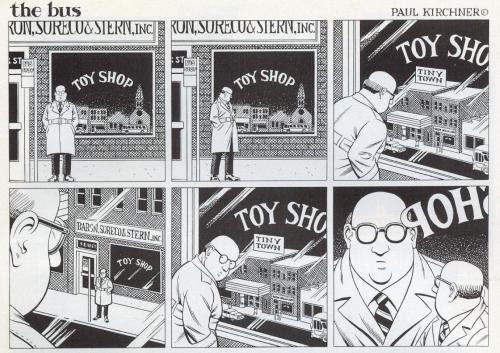 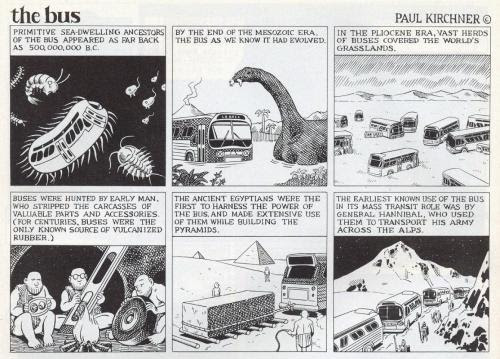 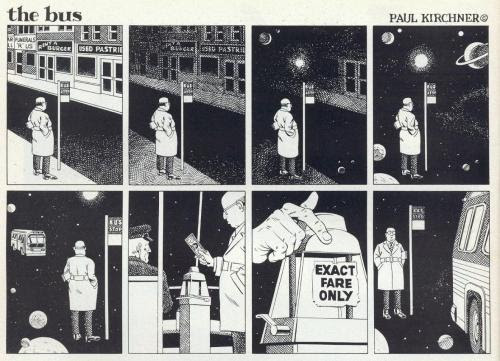 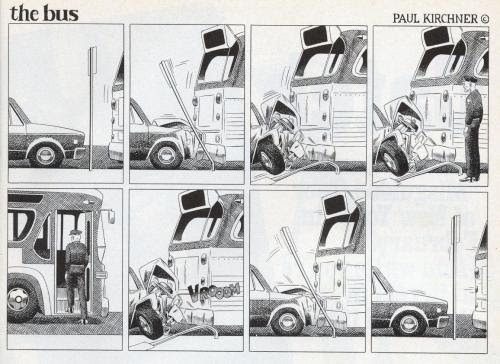 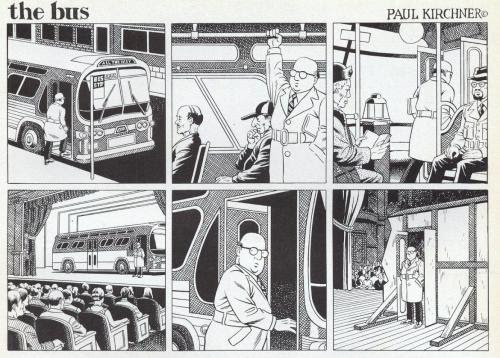 The Bus by Paul Kirchner
Posted by Angelo at 10:37 AM Nessun commento:

Posted by Angelo at 10:32 AM Nessun commento:

Posted by Angelo at 10:32 AM Nessun commento:

Posted by Angelo at 1:16 AM Nessun commento: 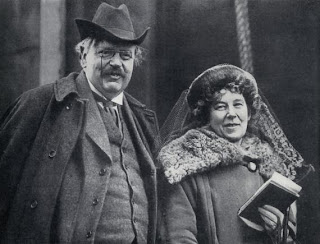 Per cui... vi aspettiamo!
Posted by Angelo at 10:48 AM Nessun commento: