Posted by Angelo at 9:12 AM Nessun commento:

We Need to Talk About Gilbert

We Need to Talk About Gilbert: " 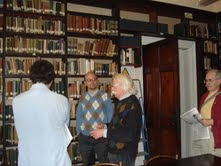 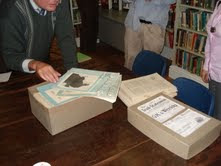 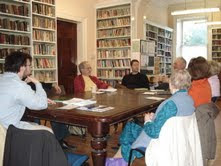 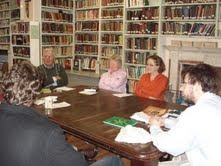 So the 'difficult second meeting' hump has been surmounted and the GK Chesterton Society of Ireland is now a time-hallowed, ivy-strewn institution!

We met last Saturday in the cosy surroundings of the Central Catholic Library, which is indeed a much-overlooked cultural treasure. Librarian Peter Costello even showed us some original copies of GK's Weekly, as well as giving us a tour of the library. Several new members attended.

Proceedings began with a lengthy paper by your blog host on the subject of Chesterton and Ireland. Having patiently endured this, the attendees fell to discussing many aspects of Chesterton's work, including Distributism, poetry, the Father Brown stories and Chesterton's historical writings.

Angelo Bottone then made several announcements, including the fact that our English counterparts were holding a Chesterton conference in Beaconsfield on the very same day.

After that Peter Costello showed us around the library itself. There was much enthusiasm for future meetings.

Thanks to everybody for coming!

Born in London in 1801, he was for over twenty years an Anglican clergyman and Fellow of Oriel College, Oxford. His studies of the early Church led him progressively towards Catholicism, and in 1845 he embraced “the one true fold of the Redeemer”. In 1847 he was ordained priest and went on to found the Oratory of St Philip Neri in England. He was a prolific and influential writer on a variety of subjects. In 1879 he was created Cardinal by Pope Leo XIII. Praised for his humility, unstinting care of souls and contributions to the intellectual life of the Church, he died in Birmingham on 11 August 1890.

From the Common of Pastors, with the psalms of the day.


From the writings of Blessed John Henry Newman, Priest

It was like coming into port after a rough sea.


From the time that I became a Catholic, of course I have no further history of my religious opinions to narrate. In saying this, I do not mean to say that my mind has been idle, or that I have given up thinking on theological subjects; but that I have had no variations to record, and have had no anxiety of heart whatever. I have been in perfect peace and contentment; I never have had one doubt. I was not conscious to myself, on my conversion, of any change, intellectual or moral, wrought in my mind. I was not conscious of firmer faith in the fundamental truths of Revelation, or of more self-command; I had not more fervour; but it was like coming into port after a rough sea; and my happiness on that score remains to this day without interruption.

Nor had I any trouble about receiving those additional articles, which are not found in the Anglican Creed. Some of them I believed already, but not any one of them was a trial to me. I made a profession of them upon my reception with the greatest ease, and I have the same ease in believing them now. I am far of course from denying that every article of the Christian Creed, whether as held by Catholics or by Protestants, is beset with intellectual difficulties; and it is simple fact, that, for myself, I cannot answer those difficulties. Many persons are very sensitive of the difficulties of Religion; I am as sensitive of them as any one; but I have never been able to see a connexion between apprehending those difficulties, however keenly, and multiplying them to any extent, and on the other hand doubting the doctrines to which they are attached. Ten thousand difficulties do not make one doubt, as I understand the subject; difficulty and doubt are incommensurate. There of course may be difficulties in the evidence; but I am speaking of difficulties intrinsic to the doctrines themselves, or to their relations with each other. A man may be annoyed that he cannot work out a mathematical problem, of which the answer is or is not given to him, without doubting that it admits of an answer, or that a certain particular answer is the true one. Of all points of faith, the being of a God is, to my own apprehension, encompassed with most difficulty, and yet borne in upon our minds with most power.

I believe the whole revealed dogma as taught by the Apostles, as committed by the Apostles to the Church, and as declared by the Church to me. I receive it, as it is infallibly interpreted by the authority to whom it is thus committed, and (implicitly) as it shall be, in like manner, further interpreted by that same authority till the end of time. I submit, moreover, to the universally received traditions of the Church, in which lies the matter of those new dogmatic definitions which are from time to time made, and which in all times are the clothing and the illustration of the Catholic dogma as already defined. And I submit myself to those other decisions of the Holy See, theological or not, through the organs which it has itself appointed, which, waiving the question of their infallibility, on the lowest ground come to me with a claim to be accepted and obeyed. Also, I consider that, gradually and in the course of ages, Catholic inquiry has taken certain definite shapes, and has thrown itself into the form of a science, with a method and a phraseology of its own, under the intellectual handling of great minds, such as St Athanasius, St Augustine, and St Thomas; and I feel no temptation at all to break in pieces the great legacy of thought thus committed to us for these latter days.

R. Of this Gospel I was made a minister according to the gift of God's grace which was given me by the working of his power,* that through the Church the manifold wisdom of God might be made known.

V. When the Spirit of Truth comes, he will guide you into all the truth.

R. That through the Church the manifold wisdom of God might be made known.

O God, who bestowed on the Priest Blessed John Henry Newman the grace to follow your kindly light and find peace in your Church; graciously grant that, through his intercession and example, we may be led out of shadows and images into the fulness of your truth. Through our Lord Jesus Christ, your Son, who lives and reigns with you in the unity of the Holy Spirit, one God, for ever and ever. 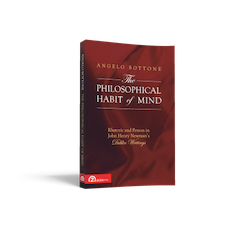 In light of Newman's recent beatification, it gives me great pleasure to share with readers of the Duhem Society blog, the news of the publication of the first comprehensive treatise concerning Bl. Newman's works in relation to his quest to establish a Catholic University in Dublin. This book is written by none other than Dr. Angelo Bottone, one of this blog's contributors and a founding member of the Duhem Society. Our congratulations to you Angelo!
Further details and purchasing information is available from the publisher's website:
http://www.zetabooks.com/new-releases/angelo-bottone-the-philosophical-habit-of-mind.-rhetoric-and-person-in-john-henry-n.html
(H/T Magdalen)

This is the first comprehensive study of John Henry Newman's works related to his foundation of a university in Ireland. It considers his Dublin Writings (1851-1859) in their totality and full meaning, in an attempt to show that they share a unity that is not merely chronological but also conceptual. It analyses Newman's volumes, articles and sermons produced while he was in residence in Dublin and explains the historical background that led to the establishment of the Catholic University of Ireland. This work offers an original exploration of the influences of philosophers such as Aristotle, Cicero and Locke on Newman's own thought. Aristotle's inspiration is presented in a new light and compared with Ciceronian rhetoric and the Utilitarianism of Locke and his followers. Moreover, the intellectual, moral and artistic dimensions of the human person in Newman's Dublin Writings are discussed, in conjuction with his concepts of the unity of knowledge and of the philosophical habit of mind. The final chapter is the author's personal reflection on the issues that Newman raised, with reference to the development of university education and to contemporary thinkers such as Derrida and MacIntyre.
Testimonia

Angelo Bottone has covered some aspects of Newman from an original perspective, focusing particularly on the rhetorical elements of his writings. In this respect, his work is innovative, as Newman’s Dublin Writings have been always considered only for their contribution to a debate on education. Angelo Bottone covers new areas, like the influence of Cicero or the role of the study of foreign and ancient languages in the university founded by Newman. Angelo Bottone’s book and its timing for publication may generate new perspectives on this period of Newman’s life. He has given a philosophical flavour to this study, which is novel as other authors have written about Newman mostly from a theological or educational view point. (Domenico Iervolino, University of Naples)

Bottone's book is an historical and thematic treatment of Newman's Dublin writings, the best known of which is The Idea of a University. The merit of this work is that is makes available an account of many other writings of Newman that are not generally available, and presents an integrated interpretation of them. Reading The Idea of a University in the context of his other Dublin writings allows the reader to gain a more complete and nuanced understanding of this centrally important text. (Gerard Casey, University College Dublin) 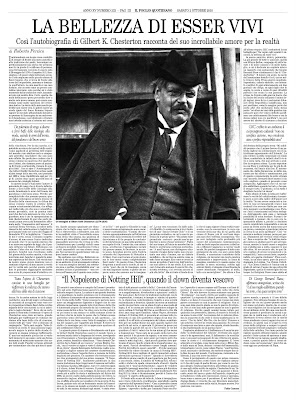