This Christmas pray for Ireland The National Catholic Reporter ‘quotes’ Newman in support of an anti-papal campaign. Why emis/em it that liberals think that Newman was one of them? | CatholicHerald.co.uk 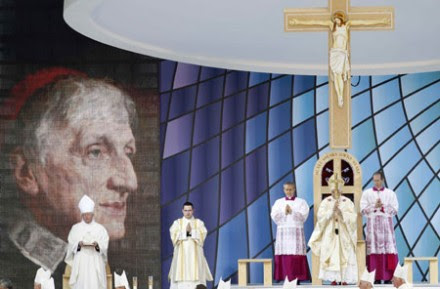 Benedict XVI presides at the beatification of John Henry Newman at Cofton Park in Birmingham (Photo: CNS)
What is it about today’s theological liberals that they are so keen on quoting John Henry Newman in support of their own disobedience? I had forgotten how utterly contemptible the National Catholic Reporter (aka, says Father Z, the “fishwrap”, ie wet and stinking) really was; I suppose, since the only time one normally reads it is in the often admirable articles of John L Allen, that one sometimes takes away the impression that if they publish him they can’t be all that grossly subversive of Catholic values and teaching. But they really are, as we see exemplified by an editorial on women’s ordination this week which is really an excuse for yet another incitement to rejection of papal authority.
But why are they so keen on recruiting Newman of all people in their crypto-protestant revolt? Either they quote him out of context or just make it up. In this case, I think it’s almost certainly the latter, since Newman just didn’t think what they say he did: “Blessed John Henry Newman,” according to the NCR’s “editorial staff”, “said [just whereexactly?] that there are three magisteria in the church: the bishops, the theologians and the people.” This little pseudo-Newmanian gem is called in aid for an incitement to an anti-papal political campaign: “On the issue of women’s ordination, two of the three voices have been silenced, which is why the third voice must now make itself heard. We must speak up in every forum available to us: in parish council meetings, faith-sharing groups, diocesan convocations and academic seminars. We should write letters to our bishops, to the editors of our local papers and television news channels.” And so on.
More here.
Posted by Angelo at 10:48 AM Nessun commento:

Posted by Angelo at 10:24 AM Nessun commento: