Where Pills Can’t Reach: The Case of a Local Miracle

Where Pills Can’t Reach: The Case of a Local Miracle

Jars of Clay If I stand

G. Cucci
Posted by Angelo at 8:34 AM Nessun commento:

Shared via AddThis
Posted by Angelo at 3:32 PM Nessun commento:

Pope Benedict XVI today recognised the healing of Deacon Jack Sullivan in 2001 as a miracle resulting from the intercession of the Venerable Servant of God John Henry Newman.

The miraculous healing from serious debility of the spine occurred in Boston in the United States of America following prayers for Cardinal Newman’s intercession.

Newman, a major theologian and convert to Catholicism, died in 1890. The Pope’s decision means that his Beatification is now certain.

“The prayers of Christ’s faithful all over the world have now been answered” said Father Paul Chavasse, the Provost of Newman’s community at the Oratory in Birmingham (UK).

“The Holy Father’s decision is one of great significance for the whole Church. I pray that Newman, by the example of his life and the depth of his teaching, will be received as an authentic guide for Catholics everywhere.

It is surely providential that the Beatification of this great English theologian will occur in the pontificate of Benedict XVI, a major theologian in his own right whom Cardinal Newman has influenced profoundly.”

In 1991 Pope John Paul II recognized the heroically virtuous life of Cardinal Newman and granted him the title ‘Venerable’. He will continue to be called ‘the Venerable Servant of God’ until the solemn ceremony at which he is beatified or declared ‘Blessed’.

The Catholic Church believes that God works miracles through the prayers of people in heaven. For someone to be proclaimed ‘Blessed’, his or her heavenly intercession must be judged responsible for a miracle on earth, which must always be a physical healing. In the case of martyrs, their deaths for the Faith alone suffice for Beatification. A panel of doctors has to rule that the healing is scientifically inexplicable, while theologians examine whether it occurred as the result of the intercession of the person whose Beatification is being considered.

If the doctors and theologians judge the case positively, it is then examined by the Cardinals and Bishops of the Congregation for the Causes of Saints. The results of these discussions are communicated to the Pope who alone can declare a healing to be a true miracle. Only when all these stages have been successfully completed does the Pope authenticate the miracle.

A second miracle has to be recognised for a person to be canonised, that is declared to be a Saint.

Jack Sullivan, the permanent deacon who was healed through Newman’s intercession, said: “Upon hearing of the recent developments in Rome regarding Cardinal Newman’s Cause for Beatification, I was left with an intense sense of gratitude and thanksgiving to Almighty God and my intercessor Cardinal John Henry Newman. I have dedicated my vocation in praise of Cardinal Newman, who even now directs all my efforts.”

In the Archdiocese of Birmingham, the Diocesan Administrator Bishop William Kenney said: “I am delighted to hear that the Beatification of Cardinal Newman will take place. This is an opportunity for a real renewal of spirit among Catholics and many others, not least here in the city of Birmingham.”

The Archbishop of Westminster, His Grace Vincent Nichols, said: “I am delighted to learn this news, which will be warmly welcomed by Catholics around the world. To have Cardinal Newman among the Blessed is an occasion of great thankfulness to the Lord and of great pride to those associated with him in Birmingham and in Oxford. I am sure he will help us greatly in the task of protecting the Faith amidst the difficulties he foresaw so clearly.”

In Rome, the Procurator General of the Oratory, Father Edoardo Cerrato, said: “On behalf of the eighty-two houses of the Oratory of St Philip Neri, Newman’s own Congregation, I welcome this decision with joy and look forward to the ceremony of Beatification with great anticipation.”

Where and when the Beatification will take place have yet to be decided. Father Chavasse explained that the cost of the ceremony is to be covered by the free-will offerings of the faithful. He added, “I appeal to everyone who has desired and prayed for Newman’s Beatification to make a donation to help.”
Posted by Angelo at 3:20 PM Nessun commento: 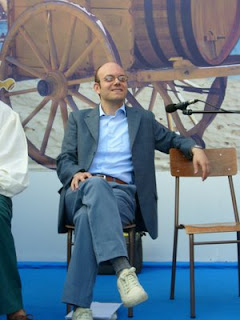