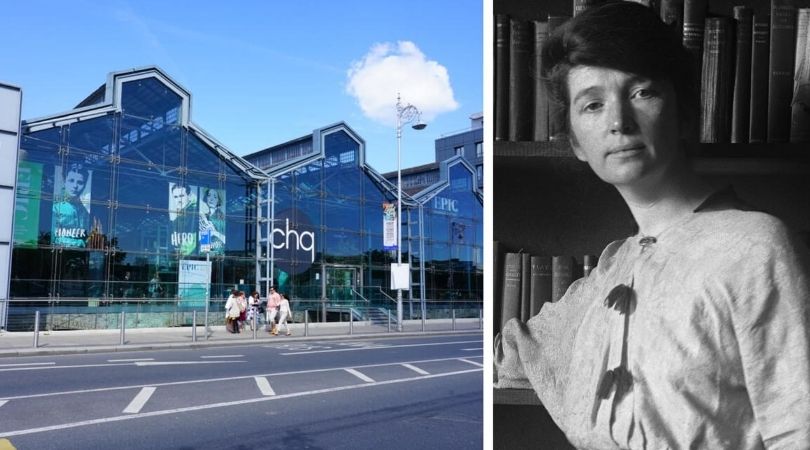 DUBLIN (ChurchMilitant.com) - A Dublin museum dedicated to Irish emigrants will remove a prominently displayed photograph of Planned Parenthood founder Margaret Sanger after a Catholic philosopher complained about her racist and eugenicist beliefs.

"When I heard that Planned Parenthood had removed references to Sanger from their facilities, I simply asked EPIC, the Irish emigration museum, if they would do the same," Dr. Angelo Bottone told Church Militant in an exclusive interview Sunday.

Seen on the Street

Bottone, a philosophy lecturer at University College Dublin said he passes "by the EPIC museum almost every day. A big picture of Sanger is displayed on one of the external windows on its facade at the Custom House Quay (CHQ) building in Dublin's docklands."

"I have never been inside the museum because there was never a proper occasion but also because it is quite 'woke.' It hosts exhibitions or book launches with a clear 'progressive' message and I don't like that," observed Bottone, a member of the Irish Philosophical Society.

Bottone said he was aware that the museum had an exhibition dedicated to Sanger, both of whose parents were Irish, and that an American visitor had complained to the museum about the racist eugenicist in 2018.

The complainant expressed "amazement" over EPIC's "displays about the rainbow movement regarding homosexuality/gay marriage and another about Margaret Sanger, the eugenicist who tried so desperately to rid the U.S. of those most undesirable through the introduction of abortion into poor areas with minority populations."

"Many poor areas had lots of Irish, it should be noted!" the complainant added, noting that the "unnecessary information was an assault and disappointment to those of us who visited the museum expecting to be more informed about the tragic situations experienced by the Irish as they tried to survive the extermination method (starvation) being used by the British against them."

However, in a 500-word response, the museum defended the exhibition on Sanger, "who advocated for the use of contraception" as an emigrant of Irish descent "leading political and social change around the world."

"We are aware that she held controversial views on eugenics. We do not advocate for those views, but we share her story in our museum as a member of the diaspora," the museum management replied.

On July 21, Bottone tweeted: "Will the @EPICMuseumCHQ in Dublin remove the large portrait of racist and eugenicist Margaret Sanger from their window?"

I would be cautious about the renaming of venues or the removal of statues of historical figures who held views we now consider controversial but were generally adopted in their time.Tweet

Bottone's initial complaint was followed by a Twitter exchange with museum authorities. On July 22, the museum told him they would take a decision soon.

"After a week I asked them about the decision. They replied that the 'photograph on our front vaults will be removed.' They said nothing about the exhibition but, to be fair, I only asked about the picture," Bottone said.

"I was delighted and a bit surprised by their reaction," the philosopher, who is also a research officer at the Iona Institute, told Church Militant.

Bottone emphasized he was not in favor of the "cancel" culture. "I would be cautious about the renaming of venues or the removal of statues of historical figures who held views that we now consider controversial but were generally adopted in their time."

"That would be anachronistic and it should be done only after a proper public debate, never by a mob," he stressed.

"Nonetheless, this is different because Sanger, who only died in 1966, actively promoted eugenics, which was opposed by many in her own time. There is no excuse here. Even Planned Parenthood acknowledged this," Bottone explained.

On July 23, Church Militant reported that Planned Parenthood in Manhattan was dropping Sanger's name because of her "her public support for the eugenics medical philosophy, which was rooted in racism, ableism and classism."

The abortion giant stopped issuing the Margaret Sanger Award after 2015. The award was conferred on contraception advocates and pro-abortion politicians, including Hillary Clinton in 2009 and fake Catholic Nancy Pelosi in 2014.

Nathan Mannion, senior curator at Epic, confirmed to The Times that Sanger's poster had been placed there "temporarily," but would be taken down because it was an "uncontextualized image, with no accompanying background or material."

Mannion said the museum is "going through everything with a fine-tooth comb" in light of the recent controversies over slavery and racism to decide if any exhibits need to be "recontexualized."

"We want to make sure that we are getting it right, and everything is up to date," Mannion commented. "This does not mean there will be dramatic changes. We don't want to shy away from contested histories. A museum is not a sanitized space, and the past is as complex as society today."

We are aware that she held controversial views on eugenics. We do not advocate for those views, but we share her story in our museum as a member of the diaspora.Tweet

EPIC, which tells the story of Irish emigration over 1,500 years, has exhibits related to 340 Irish emigrants. It seeks to explain why 10 million people left the historically Catholic island nation.

Bottone, originally from Italy, has published works on John Henry Newman, Paul Ricoeur, Ludwig Wittgenstein and Étienne Balibar. He also lectures at the School of Arts of the Dublin Business School and is involved in pro-life activism.